Match moving and its possible applications 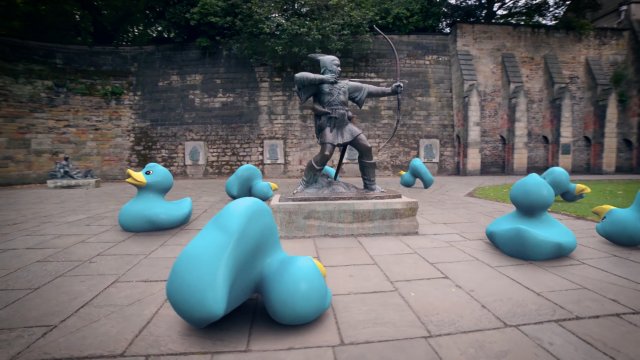 Match moving is a process used in video production and film making wherein an artificial element is placed into footage as though it was there at the time the video was shot. Its usage has become ever increasingly common place as the costs associated with the technology to perform it have decreased. Effects that once required a team of artists to manually trace and place objects, or expensive motion controlled (or locked off) cameras, can now be achieved relatively quickly and automatically by a computer. The technique has allowed film makers to take the camera off the tripod and shoot freehand, with the result being a convincing illusion of a false reality.

Once a video clip has been captured, it is analysed by a computer which looks for common points between frames. These are called tracking points. The computer compares the location of them by gradually comparing the frames before and after looking for changes. Match moving might be used to track an object in a person’s hand, or to track a space such as an entire room. This results in virtual cameras being generated which faithfully match the camera used to film the shot, giving artists a reproduction of the movement in the computer environment which they can then use.

In TV and film, match moving is used to add in objects and creatures that don’t (or can’t) exist in the real world, or to replace an actor with a digital stunt double when things get really crazy and you don’t want to kill your actors. Match moving is not to be confused with motion capture, which is the process of tracking a live actor’s performance and translating that onto a digital character.

Another benefit of match moving is that it has given TV shows a more cinematic feel through the implementation of set extensions. This is where the props department only need to build a part of a set to film the actors on. The rest of the set is then added in post-production using 3D Computer Generated Imagery (CGI). As a result, large expansive shots can be achieved in a relatively small space keeping production costs down.

In commercial, industrial and advertising media, motion tracking has been used extensively to seemingly immerse text and motion graphics into video footage as though we can visualise the digital information that flows invisibly all around us.

Technology has evolved to the point that you’ve essentially got a match moving computer in your pocket. Augmented Reality (AR) uses the camera on your phone or tablet and analyses what it sees, attaches tracking points and allows it to render graphics and 3D objects onto the display in ‘real-time’. Strictly speaking AR is different from match moving in that it gets additional information from the device’s gyro, accelerometers and GPS to help it process the image.

Whilst the process of match moving footage is speeding up by the use or new software and more powerful hardware, it still takes an artist to perfect. Computers are inherently ‘dumb’ and will make errors, so the technique still requires human intervention to wrangle the data into something meaningful.

Whether we’re adding futuristic drones flying around a city or overlaying the technical specifications of a site or product, match moving is an indispensable tool in our video production tool belt.